TRUE SATANISM
IS MORE MAINSTREAM
THAN USUALLY THOUGHT OF!


"Satanism is not a Devil worshiping cult, but a religion about respect, love, happiness and revenge." Credit: Benjamin Cloth 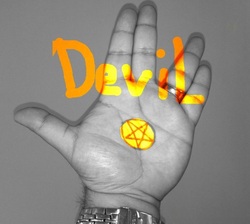 above: the famous "Il Cornuto" satanic handsign used by all satanists and many unconverted jews as well as their messianic followers.

Satanism has made its way onto the big screen, into wild adventure novels, and within the fear of countless. Selling one’s soul and gaining sadistic powers to do the wickedness of Satan is a powerful image that was created by works of fiction. The actual religion of Satanism does not worship Satan because they don’t even believe in his existence! It kind of puts a damper on the title “Devil Worshiper” doesn’t it?

Levite jew  satanist Anton LaVey founded “The Satanic Church” on April 30, 1966.  The creed would later be renamed “The Church of Satan”. The true beliefs of Satanists surprisingly match those of atheists and agnostics very closely. The original Church of Satan did not see Satan as a deity, but as a symbol of Man’s true nature. This idea is not far off from Christianity, which holds the idea of original sin. Greedy, beastly, evil, and selfish are the qualities that this religion emphasizes within every human. The Church of Satan worships the idea of Satan being true to his desires and the folklore that surrounds his approach to life.

Advertisement The religion associated with The Church of Satan now is known as LaVeyan Satanism. After the church became popular, many branched out and created their own sects of this new and taboo religion. The official statement of the church regarding other Satanist’s organizations is that they are not recognized and are simply reverse-Christians, pseudo Satanists such as misinformed “wannabes” or emo children exploring the “dark side”, and actual Devil worshipers.   LaVeyan Satanism proclaims not to have a deity, and claims to believe that nothing exists beyond this plane of physical  existence. They chose Satan is their mascot like a football team would choose their, and for lack of a better word, because he sees what he wants, and goes after it. It’s as simple as that. LaVeyan Satanists believe that you have but one miracle called life with no punishments or repercussions attached afterwards. They easily answer the question, “What’s the purpose of life?” with a simple response: “To enjoy it by getting your way!”

Satanists do not believe in harming others and actually have morals and values that most would agree with and happily uphold. From the eleven satanic rules of the Earth, we see satanic values such as:


#2 Do not tell your troubles unless you are sure they want to hear them.  (But they dont tell you that if you hear them, you are committed to them).

#3 When in another’s home, respect them, or else do not go there.  (But they have no real rules about respecting others).

#5 Do not make sexual advances unless you are given the mating signal.  (As if by getting a sexual signal then it was okay to engage in sex).

#9 Do not harm young children.  (As if "older" children, teens and adults could be harmed).

#10 Do not kill non-human animals unless you are attacked or for your food.  (As if humans were animals).

#11 When walking in open territory, bother no one. If someone bothers you, ask them to stop. If they do not stop, destroy them.  (Where "destroy" =  kill!)

Peter Howard Gilmore, the current Magus High Priest of The Church of Satan encompassed the true essence of Satanism in his essay, “Satanism: The Feared Religion”, by cunningly explaining (to deceive the naive)  that, “The reality behind Satan is simply the dark evolutionary force of entropy that permeates all of nature and provides the drive for survival and propagation inherent in all living things. Satan is not a conscious entity to be worshipped, rather a reservoir of power inside each human to be tapped at will."


Ironically,  rabbinical judaism believes the same...and so do many messianics whi follow them,  many christians and atheists as well...Clearly, the entire world is under deception, and "the lies of Babylon lead to death."